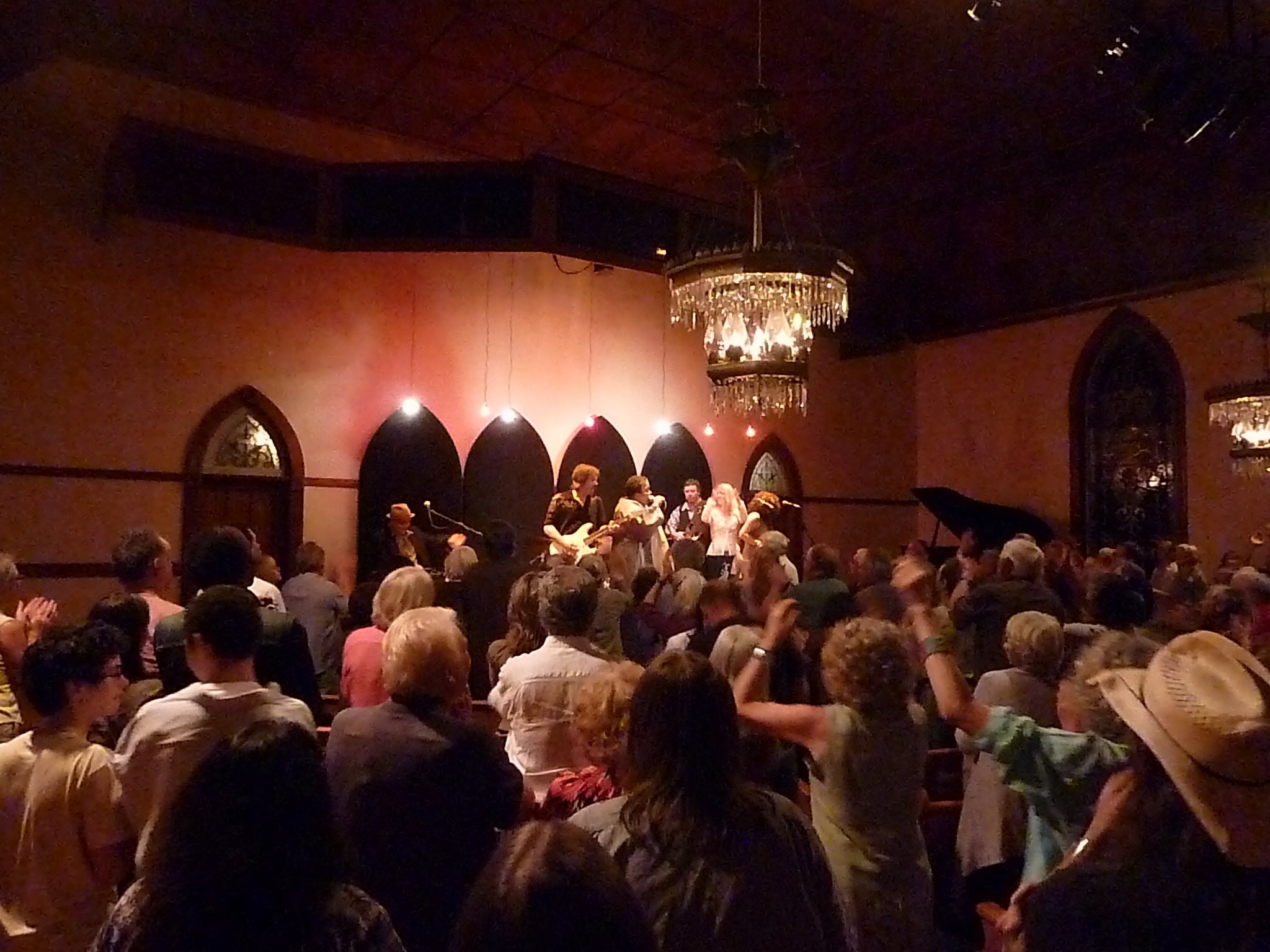 In addition to his two full concerts, jazz clarinetist and saxophonist Al Gallodoro (1913-2008) recorded a 2-day session here in 2004 (at the age of 91!), featured on disc 1 of “Infinite Gallodoro.” Dubbed “the World’s Greatest Saxophonist” by bandleader Jimmy Dorsey, Al moved to Oneonta in 1981 to teach at Hartwick College, quickly becoming a beloved member of the community.

You can read more about Al’s extensive bio and discography, as well as the Al Gallodoro Music Memorial Fund at algallodoro.com

Guitarist Leo Kottke is known for his innovative fingerpicking style and syncopated, polyphonic melodies. Heavily influenced by blues icon Mississippi John Hurt, Leo Kottke emerged as one of the most influential acoustic guitarists of the 1960s, bringing a unique sound and virtuosic flourishes to the instrument.
Over the years, he overcame a series of personal obstacles, including partial hearing loss and a nearly career-ending bout with tendon damage in his right hand, which led him to adapt his playing style. Best known for his solo instrumental albums, such as 1999’s One Guitar, No Vocals, Kottke has more recently found inspiration in collaboration as a duo with Mike Gordon, the bassist from the band Phish. Their third collaborative album, Noon, was released in 2020.

This GRAMMY-nominated, all-female bluegrass-roots-Americana string band strives to improve opportunities for women & girls through advocacy, mentorship, programming, & performance, “to keep up the tradition of the women who trailblazed before us and leave the world a better place than when we found it,” says lead singer Celia Woodsmith, “…asking ourselves, ‘Are we doing enough? Are we going to look back and wonder why the hell we didn’t do more?’”

Della Mae has worked toward that goal by teaming up with the US State Department, traveling to over 30 countries in an effort to spread peace and understanding through music. “Advocating for women’s rights is the backbone of this band, and we realized that adding public service work to our touring was an important way we could make a difference.”

The band’s fourth album, Headlight (2020), is a lyrical platform for change, a collection of songs with messages of perseverance in the face of adversity. Listen here

“We decided we don’t have to carry the weight of other people’s expectations of who we are anymore. As women living in today’s world, we no longer feel the need to bow down to anything or anyone, and it feels incredibly liberating”—Celia Woodsmith.

Nellie McKay seamlessly blends the American Songbook with classic cabaret, clever commentary, & charming (dark) comedy while accompanying herself on the ukulele & piano. Her eighth release, Bagatelles (EP), came out in 2019.

Described by the Los Angeles Times as a “Harlem Holly Golightly, a social activist with a disarming mastery of pop vernacular,” Nellie McKay tirelessly advocates for feminist causes & civil rights, among other ideals, calling herself an “annoyingly vocal critic of endless war, capitalism, and the two-party system that sustains it.” She has received the Humane Society’s Doris Day Music Award and the PETA Humanitarian Award in recognition of her dedication & support of animal rights.

In addition to her albums, McKay co-created and starred in Old Hats, an award-winning off-Broadway hit, and wrote & performed four acclaimed musical biographies: I Want to Live!, the story of Barbara Graham, the third woman executed in the gas chamber at San Quentin; Silent Spring: It’s Not Nice to Fool Mother Nature, an exploration of environmental pioneer Rachel Carson; A GIRL NAMED BILL—The Life and Times of Billy Tipton; & The Big Molinsky— Considering Joan Rivers.

Founded in 1976, Spiderwoman Theater—named after the Spiderwoman deity from Hopi mythology—blends traditional Indigenous art forms of storytelling, storyweaving, music, & dance with contemporary Western theater. Known as the first Native American women’s theater troupe, the collective sprang out of the feminist movement of the 1970s and the disillusionment with the treatment of women in radical political movements of the time.

The company quickly emerged as a leading force for Indigenous women, artists, & cultural artisans. They questioned gender roles, cultural stereotypes, and sexual & economic oppression. They took on issues of sexism, racism, classism, & violence in women’s lives. Their weaving of humor with popular culture & personal histories along with their sometimes shocking style has entertained, excited, & challenged audiences in the US, Canada & around the world for more than 40 years.

Founders, sisters, & elders of the Kuna and Rappahannock nations, Muriel Miguel, Gloria Miguel, & Lisa Mayo (who passed away in 2013) are the grandmothers of the Indigenous theater movement in the US & Canada and mentors to the upcoming generation of Indigenous performers, writers, & educators. The three women were the founding contributors to the Native American Women Playwrights Archive at Miami University in Oxford, Ohio, where they received honorary Doctorates of Fine Arts in 1997 for their life’s work & contribution to the theater. In 2005, Spiderwoman Theater was honored as part of the “New Tribe, New York” exhibit at the Smithsonian’s National Museum of the American Indian in New York City. In 2010, they received The Lifetime Achievement Award from the Women’s Caucus for Art.

Spiderwoman Theater continues to move forward in its ambition of creating an artistic environment where Indigenous arts & culture both stand on their own as a vital element of the larger arts community, while also coming together with women’s & arts communities to examine and discuss their cultural, social, & political concerns.

Richie Havens (1941-2013, pictured here at The WKC in 1992) is best remembered for conveying messages of brotherhood and personal freedom with his intense, rhythmic guitar style and soulful covers of pop and folk songs.

As the opening performer at the 1969 Woodstock Festival, Havens improvised a song based on the enslaved African American spiritual “Motherless Child” that became his hit “Freedom.” (The next bands were having trouble getting to the stage, so he needed to extend his setlist in a pinch!)

Havens is remembered as a gentle, loving person who took every opportunity to use his music to help improve people’s lives. Of Native American (Blackfoot) and British West Indies descent, he played countless benefit concerts on behalf of civil rights, antiwar, and environmental causes.

He also devoted considerable energy to educating young people about the critical urgency of environmental activism. In 1975, Havens co-founded the Northwind Undersea Institute, an oceanographic children’s museum in the Bronx. In the early 1980s, he created the Natural Guard, an environmental organization for children. While both of these organizations are defunct now, his important message of “helping kids learn that they can have a hands-on role in affecting the environment” inspired many, and continues in the work of like-minded organizations and individuals.

In 2003, the National Music Council awarded Havens the American Eagle Award for his role in America’s musical heritage and for providing “a rare and inspiring voice of eloquence, integrity, and social responsibility.”

“I really sing songs that move me. I’m not in show business. I’m in the communications business. That’s what it’s for me”—Richie Havens

The band recently celebrated its 55th anniversary(!!) Founded in Jamaica in 1964, The Skatalites reunited periodically and have been playing regularly since 1983.

In the late ’70s, a resurgence of interest in their music began in the UK, which influenced the creation of many bands, including The Specials and The English Beat. This became known as the “Two-Tone era”—a time when British musicians fused rock music with ska and reggae. In the early ’80s, the music started to spread to the US and other parts of the world; bands began to emerge everywhere playing different flavors of ska and reggae fused with whatever else they wanted to throw in, including hardcore, jazz, and punk.

The musical collective known as Antibalas (Spanish for “anti-bullets” or “bullet-proof”) was formed in Brooklyn in 1997. This 12-piece ensemble is credited with introducing Afrobeat to a wider global audience, influencing countless musicians, and collaborating with diverse groups and artists, including Angélique Kidjo, Jovanotti, Public Enemy, Iron and Wine, Sharon Jones & the Dap-Kings, Mark Ronson, TV on the Radio, and The Roots. The group also served as the house band at Carnegie Hall in 2014 (Music of Paul Simon), 2015 (Music of David Byrne & Talking Heads) and 2017 (Music of Aretha Franklin).