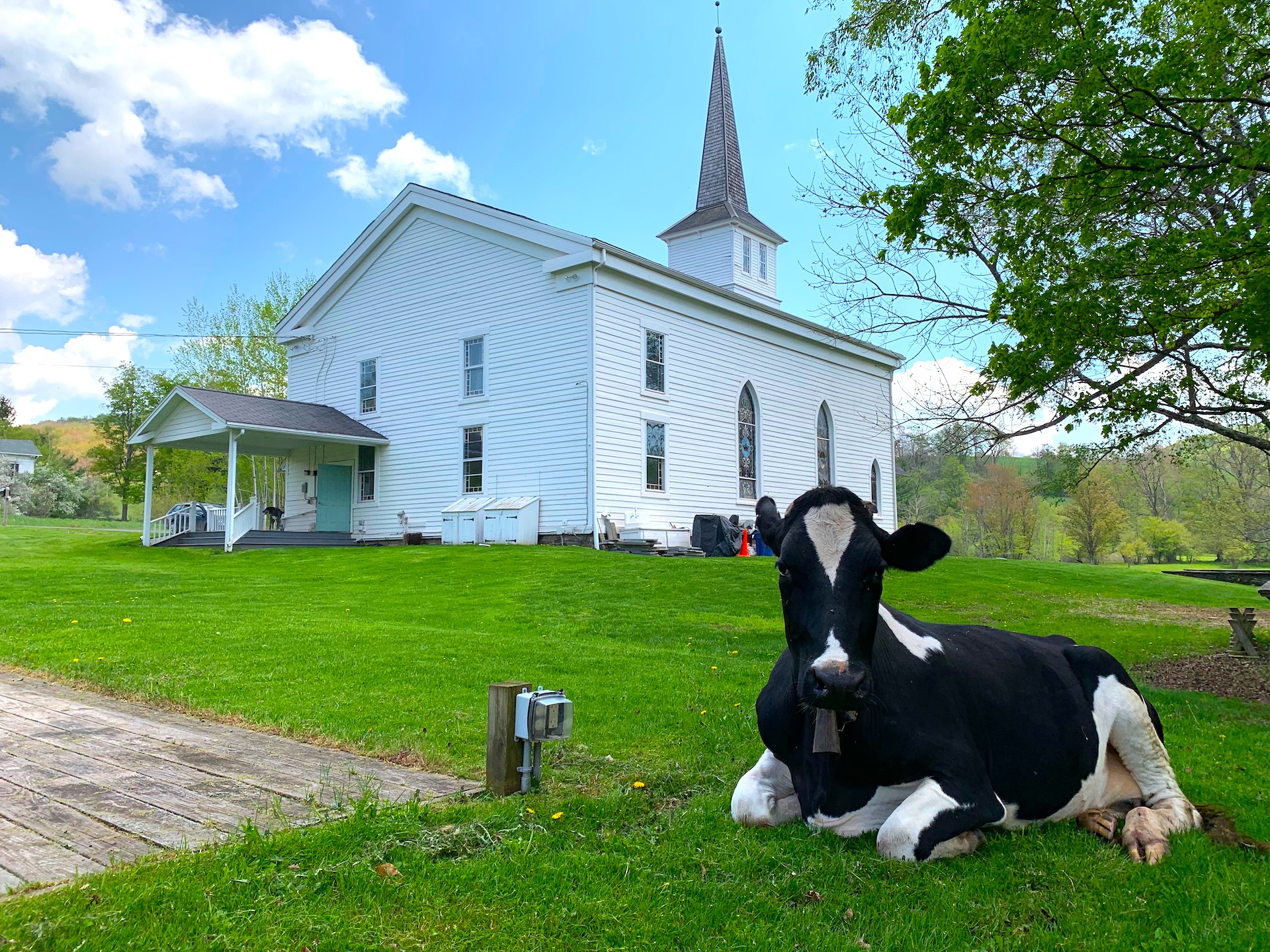 Board treasurer Danny Birnbaum is one of those people who went away to college and never returned. He found a local niche, first as employee then as owner of Damascene Book Cellar, serving the students and faculty of SUNY Oneonta.

Danny has happily lived in the Town of Meredith for over 32 years, never more than three miles from The West Kortright Centre. In 2008, soon after winning a seat on the Meredith Town Board, he was asked to join the board of WKC. Committed to The Centre’s mission, Danny is excited about the work being done by the staff and board to further integrate WKC and the community through local, family and young people’s programming while maintaining the world class quality of performances for which The Centre is known.

Being a true adventurer at heart and a lover of natural beauty, Danny’s passions run the gamut from playing bass in Cajun bands and Appalachian Old-Time string bands, to traveling to festivals and music workshops, to hiking and cycling this area’s exquisite byways and hills

“I spent my early years in Washington, DC, my college years in Vermont, and ended up in NYC. I planned on being an artist but became an urban planner instead working mainly on low income housing solutions,” writes WKC board president Elisabeth Searles. “My husband, Richard Friedberg, a sculptor, and I bought our dilapidated Quaker farmhouse with a beautiful view in the early 70’s. While living in NYC, we spent most weekends and as much of the summer as possible working on the house and clearing the fields of old shower stalls, derelict washing machines, and rusted out farm equipment. – I think the first time II came to an event at the WKC was the 1989 Gala Dance Party with the Bhandu Boys, a Zimbabwean “Jit” band. I vividly remember the dancing and the beauty of the night. Years later, my son participated in Shakespeare in the Valley and I loved the place: the community, the beauty of the spot, the programming. And even though I didn’t get there as much as I wanted, I loved that the Centre existed. When we began to live in Harpersfield full time, I wanted to connect more with the community, and the WKC seemed like the right place. Being on the board has been a great pleasure – I have met really great people, had fun organizing big events, and enjoyed being part of steering a small nonprofit.”

A recent (2020) addition to our board, Jen Kuhn became enchanted by Delaware County more than 20 years ago while visiting a close friend in Bovina. In 2012, she and her family bought a house and began spending weekends and summers here. In 2019, after 25 years of living in NYC, they relocated to Treadwell full-time and recently moved their business Argosy Designs to Delaware County, as well.

Joining the WKC’s board has offered Jen the opportunity to be of service by contributing her knowledge and experience in business and nonprofit management.

Longtime board member Barbara Lawry writes:
“I am extremely proud of the WKC and what it provides for our community: from outstanding performances, inspiring and enlightening workshops, readings, gallery exhibits, fairs and Shakespeare for children and young adults, the array is impressive. It is also very exciting to present the Young Artists Showcase to highlight the talents of area youth.”

We’re so fortunate to have board member Bruce Habegger and stalwart WKC volunteer Marianne Neuber on our team! Bruce & Marianne have lived in Conesville (southern tip of Schoharie County) for 24 years. They operate a sustainable, subsistence farm with chickens, honeybees, fruit trees, berries and vegetables.

Inspired by Thoreau, the Nearings (Helen and Scott), Wendell Berry and others, in 1996 they set upon an “experiment” to live a deliberate life, growing and preserving as much food as possible to get through four seasons. The idea was to avoid ever being seen in the produce aisle of a grocery store. Through freezing, canning, fermenting, drying and bottling, they are deep into the ever-challenging but ultimately rewarding endeavor to be self-sufficient while minimizing their environmental impact on the land’s resources.

WKC board member Ian Stell is a designer and artist who, along with Mary Pratt, has lived for the last five years a short distance away from the West Kortright Centre, in East Meredith. Ian was born and raised in NYC, but knew in his heart that he’d live in the country eventually. As a child, he sang in the choruses of The New York City Opera and The Metropolitan Opera. And although his musical taste is all over the map these days, he considers both making and listening to music a spiritual practice. Upon discovering the Centre, he was immediately drawn to its broad cultural program—bringing world class musicians from around the globe to an intimate and engaged audience in a small country church amidst sylvan bliss.

Board member Mary Pratt produces photo and film shoots, and was introduced to Delaware County by Rob Howard several years ago. At the end of the shoot, she’d fallen in love with the area, the many inspiring Delco folks she’d met over the course of the production, Bovina Farmer’s produce and Table on Ten’s pizza. She and Ian Stell bought a house in East Meredith in 2015, and have been enjoying the West Kortright Centre’s performances and community gatherings for the past five years. In 2019, she applied her organizational skills to putting together the West Kortright Fair, with great success and lots of community involvement.

Board member Rachel Watson is a photographer who has lived in Delhi since 2008. Originally from Northern California and living in Brooklyn, she discovered the Catskills and Delaware County while visiting a friend in Bovina. The next weekend she and her husband bought 17 acres on a hillside near the top of an impossibly steep road where they built a house and studio. While she still travels for her work, the Catskills are her home

The first performance she attended at WKC was Estonian fiddler-singer-composer Maarja Nuut. The beauty of the afternoon performance in the small church adjacent to a dairy farm where the sound followed you into the landscape was impossible to forget.

In 2018, Rachel joined the board. She worked to establish the children’s music programming series, Songbird Sessions, which will continue its second season when circumstances permit. She proudly inherited hosting the legendary cake stand of the WKC Fair that for years brings together the home-baked goods of members to a very enthusiastic crowd.

A favorite memory at WKC is when her 18- month old son broke away from his seat in the pews and stood square in front of a singing Vieux Farka Touré and his band, who gave him a mid-show serenade. Although the toddler was only half impressed, his parents felt lucky for this amazing moment of community in celebration of artistic expression and the joy of sharing it with their children.

After nearly twenty years in Brooklyn, Jenine Osbon and her partner Daniel Crowell decided to leave the city four years ago in pursuit of land, quiet, and the goal of one day developing a small educational farm for children. They fell in love with an old farmhouse in Delhi with 36 acres, and today they cultivate 1/2 acre of land with perennial and annual food plants.
In 2019, Jenine launched her children’s gardening program, Roots & Shoots, with the hopes of instilling curiosity about the natural world for participants of all ages.

With two children in tow, the West Kortright Centre has become a place of musical refuge for Jenine and her family. The West Kortright Fair is their favorite yearly event, and last year’s Songbird Sessions series prompted Jenine to want to join our board and get more involved with The WKC. She loves that The Centre is family friendly, and looks forward to her children growing up here, running around the tables outside amongst the serene backdrop of rolling hills and cows mooing in the distance.

Jerald Stein joined our board in 2019
“I’ve been coming up to the Catskills my whole life to ski and to camp”, he writes. “After 30 years in NYC, I made the move to live here full time and the West Kortright Centre is one of the reasons I enjoy it here so much. Live music is one of my great pleasures and thanks to The WKC, I’ve seen some spectacular performances up close and personal. Mind you, this includes groups that I’ve seen in 2,000-seat theaters in the city or down in New Orleans. Seeing New Orleans’ best drummer, Russell Batiste, playing with the Joe Crown trio a few years back was a treat, but last year’s Mohsen Namjoo show was the ne plus ultra. Namjoo, as a child in Iran, was inspired by a video of WKC’s beloved Meredith Monk – and there he was, many years later, performing while she sat in the second row. Not in New York, not in San Francisco – but right here in Delaware County, where I and 150 of my neighbors witnessed an incredible performance. This is the kind of magic that WKC makes possible, and why I support it.”

Board member Michael Herstand is an artist and cabinetmaker. He and his wife Kamilla joined the West Kortright Centre ten years ago. They have enjoyed many concerts, performances, picnics, art shows, and the annual fair here each year, ALWAYS marveling at their good fortune to have access to such a special performing arts venue in such a bucolic landscape. Michael became a board member 4 years ago and since then has grown and chopped an enormous pile of kale for salads at the fairs.